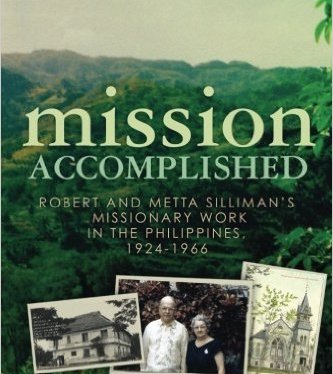 During the last week of January, our family traveled to the Philippines to attend a regional gathering for all Presbyterian World Mission personnel serving in Asia and the Pacific.  Although it was our first time traveling there, we learned that our connections to the Philippines begin with Midland, Michigan, our home base for the past 6 years, in more ways than we thought.

Consider the early 1920s, a very different time in the life of the Church and the United States, when the fervor to obey the Great Commission compelled many young men and women to serve at a fever pitch:  a young single woman named Metta Jacobs, heeded the call to serve as a missionary in the Philippines.  There she met Robert Silliman, another young man who was also heeded a God-given call to serve as a missionary in the Philippines too.  (Although Robert shares the same name as the university, it was a New York philanthropist named Horace Silliman who provided the initial funding for the institute which became the university).  Together they eventually worked for Silliman University in Dumaguete City, while providing for the needs for their students, preaching the gospel to neighboring villagers and providing for their spiritual and physical needs.

Over the next four decades which included hiding from the Japanese invaders during World War II, repatriating to Australia, recuperating in the United States only to return later to the Philippines, the Silliman’s would serve faithfully as one of the longest-term missionaries.  Financial and spiritual support for their mission endeavors came through the generosity of people like Grace A. Dow and the Women’s Association and the First Presbyterian Church of Midland.

So what does Midland, Michigan have to do with the Philippines?  Get ready for the “goosebumps from God,” knowing that God is truly in the details:  The First Presbyterian Church of Midland is now known as The Bertha E.R. Strosacker Memorial Presbyterian Church, and more recently, the church where I served as Associate Pastor.  During my tenure, our church archivist Tawny Nelb introduced me to her book called “Mission Accomplished,” about Robert and Metta Silliman.

Fast forward to our first full day of the gathering which included tremendous hospitality from our hosts at Silliman University:  starting with Sunday worship, lunch, presentations and dialogue with the University President Dr. Ben Malayang III, campus tour, and concluding with the dedication of Presbyterian mission rock garden to highlight the 3-fold mission emphases of teaching, preaching and healing.

During our dialogue with the President, I shared these connections between Midland and Silliman University.  His response included a litany of Metta Silliman’s contributions, but also his hope to study more of the weekly letters exchanged between Metta and Grace.   I presented Dr. Malayang with the book called “Mission Accomplished,” written by the Tawny Nelb, the same archivist who handled all of these primary source materials including those very letters.

Grateful as I am for these gifts of the past and heritage and legacy, I am aware of additional gifts that we received during this regional gathering for all Presbyterian World mission personnel serving in Asia and the Pacific, that will carry our family forward into the future:   Our Presbyterian Church (USA) and the United States stand at a critical place in time and history, which is both our challenge and calling to serve as mission co-workers.

Each day of our gathering Dr. Cynthia Rigby led spirit-filled devotions and evening vespers inviting us to wonder with God and with one another. Rev. J. Herbert Nelson II provided challenging keynote discussions about the condition of the Presbyterian Church (USA), American politics and factors for effective Christian advocacy.  Planned events aside, several informal conversations also left lasting impressions:  During a dialogue about the challenges of how to support the financial future of Presbyterian World Mission, one mission co-worker urged us towards personal financial commitment in supporting all mission personnel.  Over several meals with Young Adult Volunteers serving in Korea, I listened to how they were learning about the challenging political realities and the very challenges of communicating these with friends and especially family members at home.   It was also refreshing to compare notes about these earliest years of mission service, some of whom are also families with younger children, while reflecting aloud with more seasoned mission personnel about their experiences and wisdom over the years.  During a day of recreation, we also enjoyed the wonder of God’s creation while swimming with whale sharks.

Once again, I affirm that God is at work and has been at work, not only because of these inter-cultural connections across time and place, but also because of the ability to “connect the dots” that can further support my convictions and calling.  God’s mission is ongoing in this critical and different time and place.  I cannot help but wonder about the future of the Presbyterian Church (USA) and the leadership and future of the United States, and I wonder about how God will lead us as a family to serve in this new appointment.

Into this mixture of emotions, I plod not with heaviness but proceed with greater affirmation because of something else that I glimpsed during our last appointment before leaving Dumaguete City.  Over lunch, I spoke with the program manager of an NGO that advocates for people to reconsider a life outside of trafficking, even before being lured into it, but especially after someone has been trapped, rescued and now providing holistic healing during recovery.  This NGO is partnering with the local city church to create a shelter of holistic healing for trafficking survivors.  Last fall, this NGO trained local pastors about human trafficking, citing Biblical Joseph as one prime example who was trafficked by family members.  Get ready for more goosebumps:  Throughout the fall and winter, I have also preached about this same Joseph, inviting people to consider his dreams both dashed and fulfilled and overtaken by God’s promises to redeem the circumstances and to reconcile the relationships between him and his brothers!

What a wonder that the Spirit breathes such inspiration in the Philippines and the United States!  Out of such convergence, I imagine that God’s Spirit is making way for a different kind of space, into which local churches, both in the United States and the Philippines, can partner together in God’s mission defined as advocacy of “speaking truth in love to power” (to quote J. Herbert Nelson), as all of us work towards the fullness of God’s kingdom.

Partnered together around the issues around human trafficking and migration, as both advocacy and mission, in the local and global mission context, what might that look like?  Come, I invite you to explore and wonder with us.

One thought on “Goosebumps from God”